Happy Thursday to all! Move over Nancy Drew as Angela Hardwicke is back in HOT ASH by Russ Colchasmiro. Read on to find out more.

Following the mysterious and ill-timed death of her elderly husband, Camille Engquist was set to inherit the family’s real estate development company. But her stepkids stole it from her first. Or so she claims.

As Hardwicke and her protégé Eric Whistler dive into the world of affordable housing, synthetic concrete, and corporate succession planning, their investigation puts them face-to-face with the haves and have-nots, a new form of cocaine, a boundary-pushing neurobiologist, a majestic domed city and a violent conspiracy that stretches farther and deeper than they ever could have imaged. But the most insidious betrayals are sometimes closer to home.

In Hot Ash, Russ Colchamiro’s most action-packed Sci-Fi mystery yet, Angela Hardwicke must grapple with the worst pain of all—that the people we love are the ones we should fear most.

And don’t miss the first two books in the series, Crackle and Fire and Fractured Lives!

Add it to Goodreads 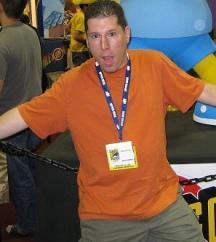 Russ Colchamiro is the author of the rollicking space adventure, Crossline, the zany SF/F backpacking comedy series Finders Keepers: The Definitive Edition, Genius de Milo, and Astropalooza, and is editor of the SF anthology Love, Murder & Mayhem, all with Crazy 8 Press.

Russ lives in New Jersey with his wife, two ninjas, and crazy dog Simon, who may in fact be an alien himself. Russ has also contributed to several other anthologies, including Tales of the Crimson Keep, Pangaea, Altered States of the Union, Camelot 13, TV Gods 2, They Keep Killing Glenn, Thrilling Adventure Yarns, Camelot 13, and Brave New Girls.